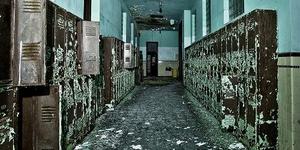 ALBANY, NY — Albany Barn will hold an opening reception for “Lost and Found,” a photo retrospective of the abandoned St. Joseph’s Academy building, on Friday, June 1, 2012 from 5:00pm – 9:00pm at Stage 1, Albany Barn’s community art space located at 46-48 North Swan Street. The reception takes place in conjunction with the monthly “1st Friday” arts walk in the City of Albany and the 1st Friday Trolley will provide complimentary transportation to and from the venue. Upstate New York band, Giles Bennett and the Petrified Woods, will perform live. Admission is free.

Albany Barn has partnered with the Albany Housing Authority and the City of Albany to redevelop St. Joseph’s, a long-vacant former school building in the Arbor Hill neighborhood, into a permanent creative arts incubator and community arts center in Albany, NY called The Barn. “Lost and Found” will feature photos of St. Joseph’s taken by photographers Jesse Bouley, Paul Gallo, Darren Ketchum and Julia Zave prior to the start of renovations in February 2012.

Jesse Bouley graduated from the Rhode Island School of Design in 2009 with a BFA in graphic design. Bouley’s “Through Open Windows” series features captivating photographs from the interiors of vacant and abandoned spaces including St. Joseph’s Academy. Bouley works in various media, including photography, screen-printing, painting, and furniture design. www.jessebouley.com

Paul Gallo, like many people, has always had a fascination with what lies on the other side of a door labeled ‘keep out’. He loves the adventure of walking through an old mill, hospital, or hotel—discovering artifacts from the previous inhabitants and imagining the story of each object left behind. In the last few years, he has been fortunate to photograph a number of unique structures; documenting the period of time between disuse and demolition. To see more of his work, visit http://ww.no3rdw.com

Darren Ketchum is a Capital-Region based photographer whose explorations of abandoned buildings renewed his love of photography. Beginning in 2007, Ketchum discovered that the various levels of nature’s reclamation mixed with items left behind to create a unique photo. Initially taking only a point and shoot camera on expeditions to document various facilities, he has been honing his style with every building he explores. www.flickr.com/photos/nerradk

Julia Zave is a freelance documentary, music and editorial photographer based in Albany, NY. Since 2005, her work has been recognized both regionally and nationally. In addition to assisting in coverage of the St. Joseph’s Academy project for Metroland Newsweekly, Julia has documented countless events for Upstate Concert Hall (Northern Lights), WEQX, FLY 92.3, Step Up Presents, Ares Promotions and Atlantic Records. Her work has been published in Billboard Magazine and PDNonline.com. www.juliazavephotography.com

Live music during the opening reception on June 1st will be presented by Giles Bennett and the Petrified Woods. The band describes itself as “pure of heart upstate New York Americana with a down state Indy flair.” They blend original songs about broken hearts, broken laws and hometown pride with a catalog of classic country. Soft electric jangle, delicate horns, and Giles’ own heartbreaking warble strike a tender counterbalance. www.thepetrifiedwoods.bandcamp.com

“Lost and Found” will remain on view throughout June and admission during regular gallery hours is free.

“Lost and Found” also corresponds with “Groundbreaking,” a fundraiser for Albany Barn on Friday, June 22nd with food by the Chefs Consortium featuring Albany’s own 2x Chopped™ Champion chef Ric Orlando. Event information and tickets for “Groundbreaking” are available at http://groundbreaking.albanybarn.org