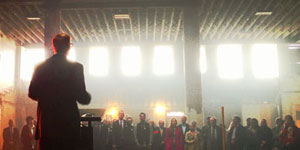 On Wednesday, April 10, a large crowd of community leaders and stakeholders gathered in the former St. Joseph’s Academy for the official groundbreaking of The Barn/Academy Lofts.

Though construction on this project began in February, 2012, this was the first opportunity for community members to gather at the project site and see firsthand the ongoing transformation of the interior. Following the formal program, which was held in the former gymnasium, guests were invited to tour several of the live-work apartments currently under construction on the building’s third floor while enjoying refreshments and music by The Sunny Side of the Street Band, led by trombonist Bryan Brundige.

Albany Barn would like to thank our wonderful partners in this project, as well as all of the community members who came out in support of The Barn/Academy Lofts!