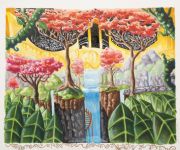 Albany Barn’s headquarters and community art space located at 46-48 North Swan Street. A reception will be held from 5:00pm – 9:00pm in conjunction with the monthly “1st Friday” arts walk in the City of Albany. Refreshments will be served. The artwork will be on display throughout the month of April. Admission is free.

“Reality Reworked” features painted works from local artists Stanley Lehman, whose work seeks to take his subjects to a world outside of our own, and Zachary Clement, whose interpretations of the human form allow his audience to break away from the influences and pressures of everyday life.

Stanley Lehman’s artwork deals with specific themes such as, science fiction, and with imagery, such as aliens, and characters that could not exist in the real world. He is inspired by movies, as well as video games, that have fantasy elements and fantasy characters. He states, “My vision has always stayed consistent. I enjoy creating artwork that is highly detailed and I enjoy dealing with the idea of places and environments that have no structure, filters, or any guidelines on what I can or cannot create. The process of creating is a powerful thing, and I’m thankful for having been given the talent and opportunity to do it”. He is inspired by Todd McFarlane, James O’Barr, Joe Madureira, and Dale Keown, Jim Lee because of the high level of detail in their illustrations and their bold style of line art

Zachary Clement is a self-taught artist who relies on trial and error, along with time in the studio to better understand his approach to painting.  His paintings are not governed by a preconceived concept or theme and experiments with new techniques and materials, attempting to reproduce an ever-changing image that exists in his mind.  The one constant motivation that can be seen in his work is the use of the figure to depict his observations in human behavior. He takes this common theme to another level, using self-reflection to create a unique perspective of a very real subject. His work does not reflect the flesh and bone portrayal that we are used to, but rather an interpretation of the effect that the standards and stresses of the real world exert upon us as individuals.

✨Gifted is back✨ We’re sending out a call to local vendors/crafters/makers and artists to participate.…