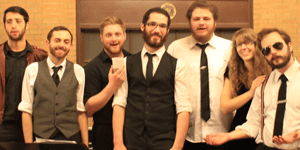 On Friday, August 10, join guest bartenders from Albany Barn at Taste (45 Beaver Street, Albany) from 6pm – 10pm for a night of hot jazz and cool drinks with the B3 Combo.

The B3 Combo is an ever-changing ensemble comprised of musicians from all corners of the B3nson Recording Company. B3 performed for the first time at Albany Barn’s EXPOSED event in October 2011, so they’re kind of our adopted band. Formed in 2011, the B3 Combo prides itself on versatility, with a wide repertoire of standards to arrangements of favorite local musicians.

A portion of the night’s proceeds will benefit Albany Barn – come early and stay late!  www.tastealbany.com

Last Friday, our six artists fought it out (in paint!) for the Summer Vacation edition…

Call for Art: Out of this World