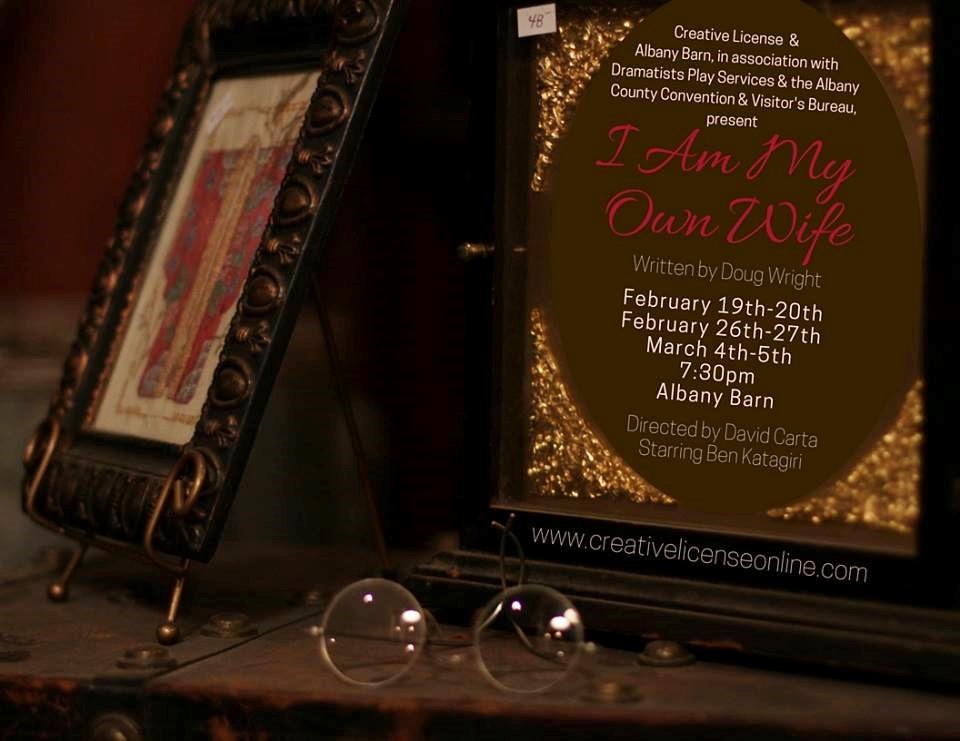 Creative License, in partnership with the Albany Barn, present Doug Wright’s Tony Award winning one-man show “I Am My Own Wife”.

Based on the playwright’s conversations with German Charlotte von Mahlsdorf and developed by Moises Kaufman and the Tectonic Theater Co. (Gross Indecency: The Three Trials of Oscar Wilde, The Laramie Project), the regional premiere will feature Ben Katagiri and is directed by David Carta. Creative License founders Casey Polomaine and Aaron Holbritter will serve as the show’s producers.

Wright, the Obie award winning author of Quills, explores the astonishing true story of Charlotte von Mahlsdorf. A transvestite and celebrated antiques dealer who successfully navigated the two most oppressive regimes of the past century-the Nazis and the Communists–while openly gay and defiantly in drag, von Mahlsdorf was both hailed as a cultural hero and accused of colluding with the Stasi. In an attempt to discern the truth about Charlotte, Doug Wright has written “at once a vivid portrait of Germany in the second half of the twentieth century, a morally complex tale about what it can take to be a survivor, and an intriguing meditation on everything from the obsession with collecting to the passage of time” (Hedy Weiss,Chicago Sun-Times).

Tickets are $15 and can be purchased here.  All performances begin at 7:30 pm.
The show runs approximately 105 minutes with one 15 minute intermission

On September 29, we joined the Free Food Fridge Family, and added a Fridge to…

Studio tenant Rob Weber is a musician and vocal coach, and he holds his semi-annual…