Bruce Morris’ Clybourne Park, a response play to Lorraine Hansbury’s A Raisin in the Sun, is a dramatic satire of the history of the Younger home in the fictional Chicago suburb. The two act play chronicles the history of 406 Clybourne Street from 1954 at the advent of the Civic Rights Movement to 2004 during the Age of Gentrification. The amazing cast consisting of George Filieau, Debra Bercier, John Quinan, Chevell Edwards, Tyler Pratt, Jessica JJ Paul, Evan Jones, Michael Sloman, and Barry Williams will be portraying a different character in each act. Classic Theater Guild is proud to present the Capital Region debut of the Pulitzer Prize winning play at the Albany Barn.

Visit our shop to purchase your tickets today! 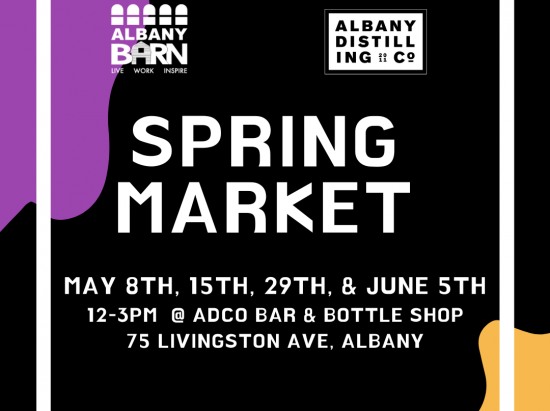 We’re excited to announce our Spring Market with Albany Distilling Co.! Our AB/ADCo Spring Market will be held on Saturday May 8th, 15th, 22nd, & June 5th from noon-3pm.  Each market will have a different roster of artists/vendors, so come…
May
16
Sun
all-day Private Rehearsal
Private Rehearsal
May 16 all-day
10:30 am Acting Class w/ Patrick White @ Albany Barn
Acting Class w/ Patrick White @ Albany Barn
May 16 @ 10:30 am – 12:30 pm