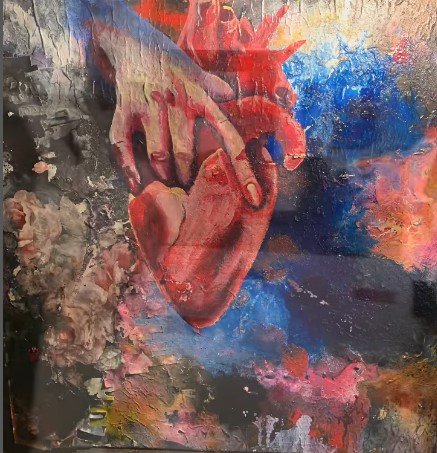 Review: “Margin of Error” by Olivia Deep and Alex Waters

“…carried down alive to wondrous depths, where strange shapes of the unwarped primal world glided to and fro before his passive eyes…”

The collaborative works of Alex Waters and Olivia Deep exhibit broadly the shiny-dirty, glamorous-slimy, floral-putrid palette of Marilyn Minter. The visual similarity ends there, though, with an atmosphere of isolation and pensiveness pervading Waters’ and Deep’s work, currently on view at the Albany Barn. The works contextualize Deep’s surreal images of human figures frozen in action within Waters’ heavily pigmented colorscapes. 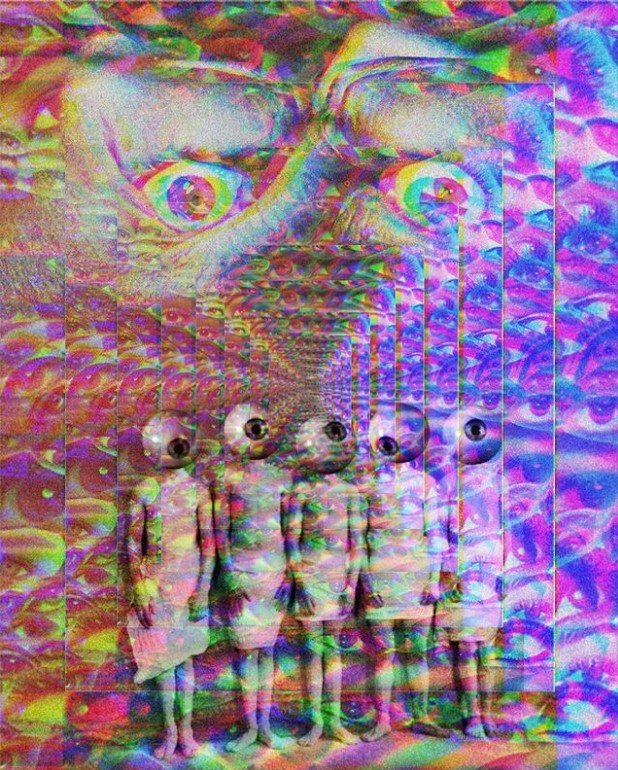 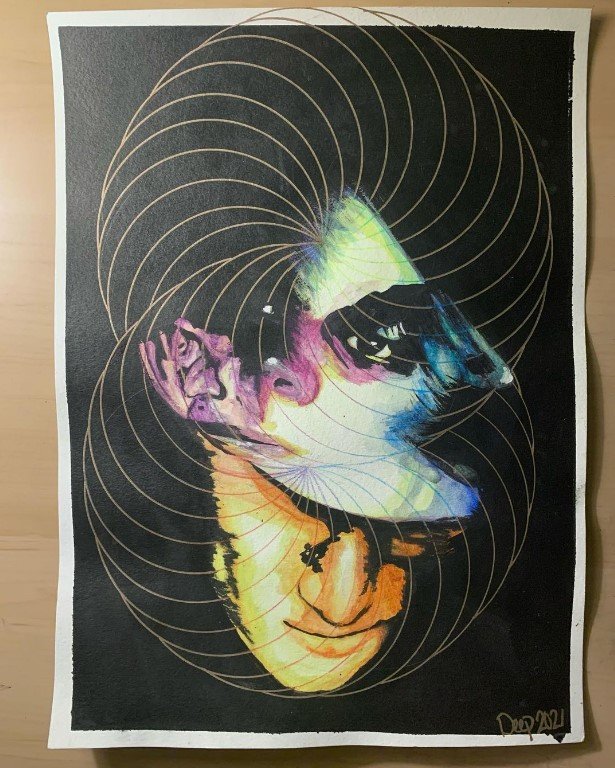 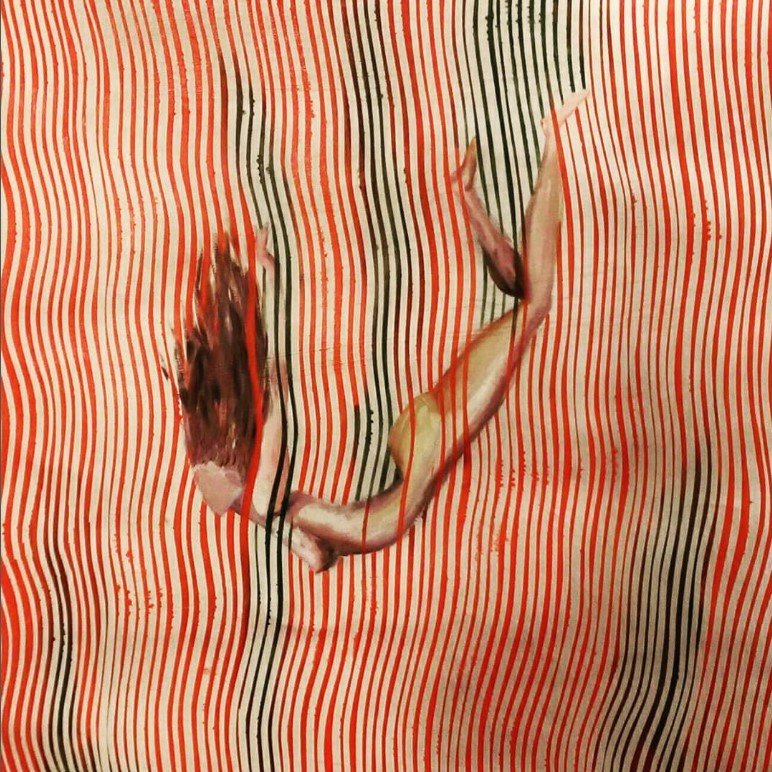 Regions of many of these works (Alone in a World Full of People, Naïve Strangers, Autonomous Sight) are either partly or fully bordered by stamped paper with a square-repeat pattern like a Victorian tin-tiled ceiling. While abstraction conventionally relies on the rectilinear canvas or frame edge to serve as the visual anchor and armature for the marks, Waters’ stamped paper encroachments on the composition creates a subsidiary window (within the primary frame edge). Like the foregrounded window in 17th century Dutch paintings of common life, the stamped paper pushes both the painted marks and the viewer’s focus deeper into the painting’s field. While not marks themselves, the paper demarcates the plane of the visual frame from what in the painting is further from the viewer than the frame: the painting’s interior. 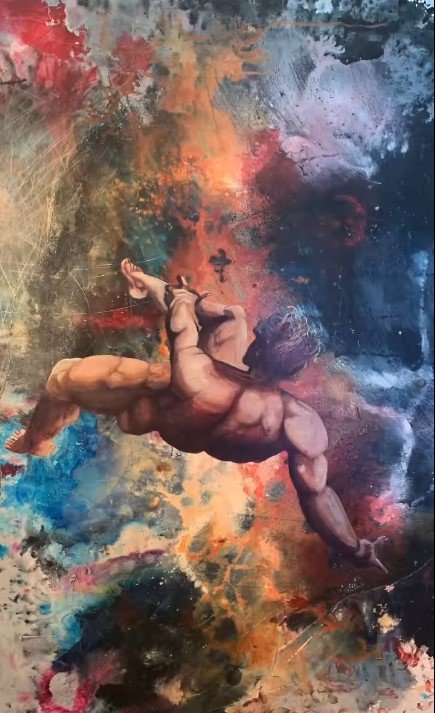 A lacquer top layer is applied with the paintings face-up so that it pools on the surface, and because the submerged surface is mixed media, different regions have different affinity for the liquid before it dries. This arises from the same liquid-solid interfacial forces that generate water beads or bubbles. This leads to a mostly glossy-smooth surface interrupted by shallow basins where the image-on-canvas is exposed; here, either insufficient lacquer or the pigment at a given spot prevents the canvas surface from being submerged. These imperfections in coverage serve to halo small regions within the painting (when lit by e.g. a spot light) like glimmer at the crest of a ripple, subtly emphasizing the exposed region’s features. Whether or not Deep and Waters designate these regions beforehand, they draw the eye across the painting’s surface to the exposed region. The viewer is then nudged unthinkingly to try and piece together why the mark there is important, how it fits with the other marks. In abstract (Painting for Clapping) or abstract+surreal-representation (Fall From Grace) paintings as visually dense as Waters and Deep’s, this forced meaning-making draws well-rewarded attention to a complex interaction of marks that seems to hold its own internal, atmospheric logic. 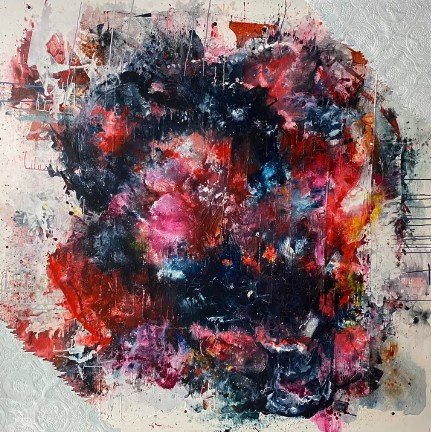 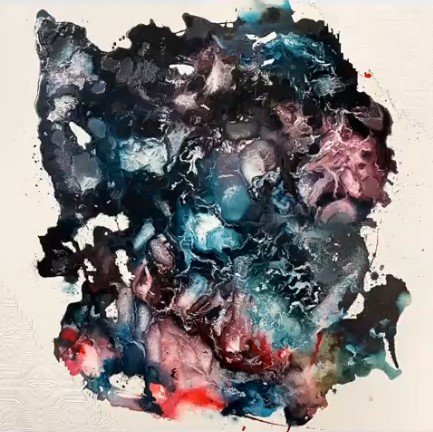 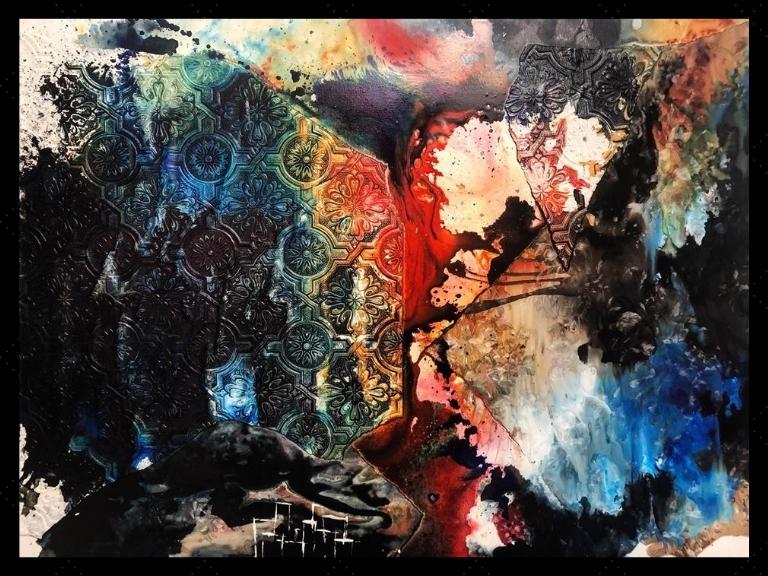 These two artists have styles that independently don’t look compatible. In person, though, the galactic fluid of Waters’ abstraction is the perfect myth to uplift Deep’s isolated, fallen heroes.

“Margin of Error” is on view at Albany Barn until July 30. It will exhibit at Nine Pin Cidery from August 5 through the end of September.

Acting Class with Patrick White at Albany Barn Saturdays 10:30AM – 1:00PM   Acting Class with Patrick White is warm-ups, games, audition prep, monologue and scene work. You’ll have a scene partner and work on some of the most exciting…
View Calendar
Add
© Copyright Albany Barn, Inc. All rights reserved.
Web Design by Elite Venture Media
Back To Top