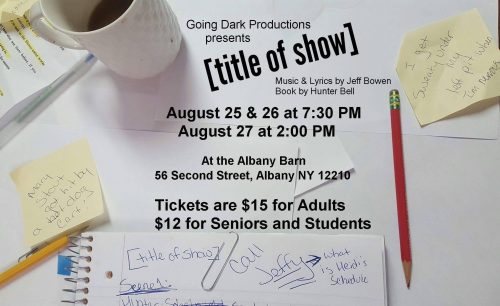 On August 25th the main stage at The Barn will host Going Dark Productions’ rendition of the one-act musical, [title of show] – a show about two guys writing a musical, about two guys writing a musical! Follow the journey of Jeff and Hunter, with the help of their friends, as they take three weeks to write a musical for a NYC theatre festival. This show has everything: five people, four chairs, and a keyboard! [title of show] appeals to those with a sense of humor, a love of the theatrical arts and a desire to be Nine People’s Favorite Thing. For more info on tickets and show times click here!

Going Dark Productions was formed in 2016 by a group of enthusiastic theatre artists looking to deliver theatre to the community in a meaningful way. With a name derived from the classic stage manager’s warning call “Going dark!”, which warns cast and crew before a full blackout in the theater – Going Dark hopes to share the true magic that happens between ‘going dark’ and ‘lights up!’ with their audience!

Join us for this fun musical comedy!

Tickets are now on sale for our 10th Annual FUSION anti-gala!

Join us on October 1st to celebrate the opening of IN A BURNING HOUSE, our…