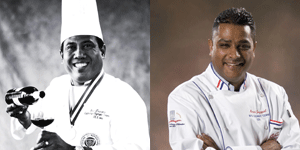 Certified Executive Chef Widjiono “Yono” Purnomo, a native of Jakarta, Indonesia and a graduate of ENHAI in Bandung, Indonesia, strives to introduce his native culture and cuisine through cooking classes, demonstrations and lectures for schools, civic organizations, and charities, as well as for fellow chefs. Chef Purnomo has represented the United States both individually and as captain of a three-member USA team in the British Open Cookery Championship, was a member of the National Chefs Tou ring Program for the two year-long Indonesian Festival and has been featured on the Today Show and Food Network. Chef Purnomo’s accolades include the National Restaurant Association’s American Dream Award and the Distinguished Restaurants of North America (DiRoNA) Award. He is affiliated with more than 75 charitable and community service organizations including  t he Albany Chefs’ Food and Wine Festival: Wine and Dine for the Arts, of  whi ch he  is a  founding member. Chef Purnomo is the Chef/Owner of the highly regarded Yono’s and DP: An American Brasserie, both in Albany, with wife, Donna, and son, Dominick.

Chef AJ Jayapal’s recipe for a great kitchen is “spontaneous cookery dictated by instinct.”  The award-winning chef has worked with prominent Capital Region culinarians including Yono Purnomo, Dale Miller and Carmine Sprio, as well as internationally known chefs such as Wolfgang Puck and Jacques Pepin.  As a consultant for the New York State Fair, Chef Jayapal created menus, hired staff, coordinated food purchases and helped to prepare for demonstrations by such TV personalities as Bobby Flay, Adam Richman and Mario Batali.  Chef Jayapal has been executive chef at the Edison Club in Schenectady, the Albany Country Club and Normanside Country Club; he is currently Corporate Food & Beverage Director for the Mallozzi Group.  Chef Jayapal is also the proprietor of Miss Sydney’s Secret Family Recipes, a locally based producer of bottled marinade, chutney and hot sauce inspired by his native India.  A member of the Agriculture & Markets NYS Pride Program, which promotes New York State manufactured goods and farming, Chef Jayapal visited Cuba to introduce NYS food products to Cuban dignitaries.