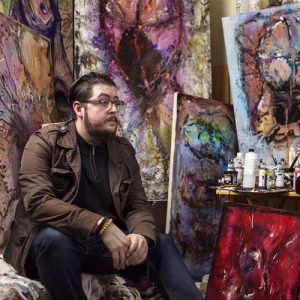 
Alex Waters was born in 1987 in Albany, NY. He was raised to the west in Esperance, a sprawling and peaceful rural area that happened to be a short drive from the urban landscape he would capture later in life. Alex struggled early on with dyslexia. While a roadblock for some, Alex saw it as an opportunity to see the world from a strictly visual standpoint. In high school, he dabbled in multiple forms of media, including graphic design, before settling on painting in college. Alex attended Sage College of Albany and graduated in 2010. His official degree was a B.F.A in Studio Arts, but his concentration still showed his true passion: painting.

Alex has been influenced mostly by abstract artist William De Kooning (1904-1997), whose expressionism and use of color changed the face of what we call modern art after World War II. When asked why he is inspired by the concept of “action painting”, Alex can only say “I’m just a guy who paints how he feels.” Alex has been featured in live painting events held by The Albany Barn, Albany Center Gallery, Wine and Dine for the Arts, and Christ’s Church Albany. He’s donated multiple live painted pieces to keep these organizations growing and contributing to the Capital Region. His work has also been featured at The Fountain Arts Show and The World Trade Gallery, both in New York City, and he recently received the Creative Spirit Award from the Capital Region Arts Center.

Both in and outside the world of visual art, abstract presenters are a mystery. They are both lauded and shunned. Their skills are doubted and awarded simultaneously. Their muses are presumed to be a deluge of political statements, ex-lovers, and pure fame grabbing. I saw in abstract art what I saw in everyday human lives: color and movement. Due to my lifelong dyslexia, I knew I could never be a writer that tells the next great American story, but I could show it to anyone that wanted to see. In popular culture, abstract art has been the butt of jokes many times over and I knew that when taking on the aggressive art form I love most. I consider myself a keen observer of not only physical form, but interpersonal relationships and my only wish is to translate it onto canvas.

While many see “action painting” as an art that’s impossible to interpret, my mission is to reach many people’s hearts and minds with wild color and brush strokes. I see that as the actual human experience, wild and colorful. My goal is to break away from the societal portraiture that many have become accustomed to and create a new sense of beauty among the overstimulated masses. I ask that you join me on this journey.

Royal is primarily a self-made artist.  Growing up with his father, art director in the…

Work-Only Residency Medium: Paint For the past half-decade, Amber Limoges’ work has centered around the…